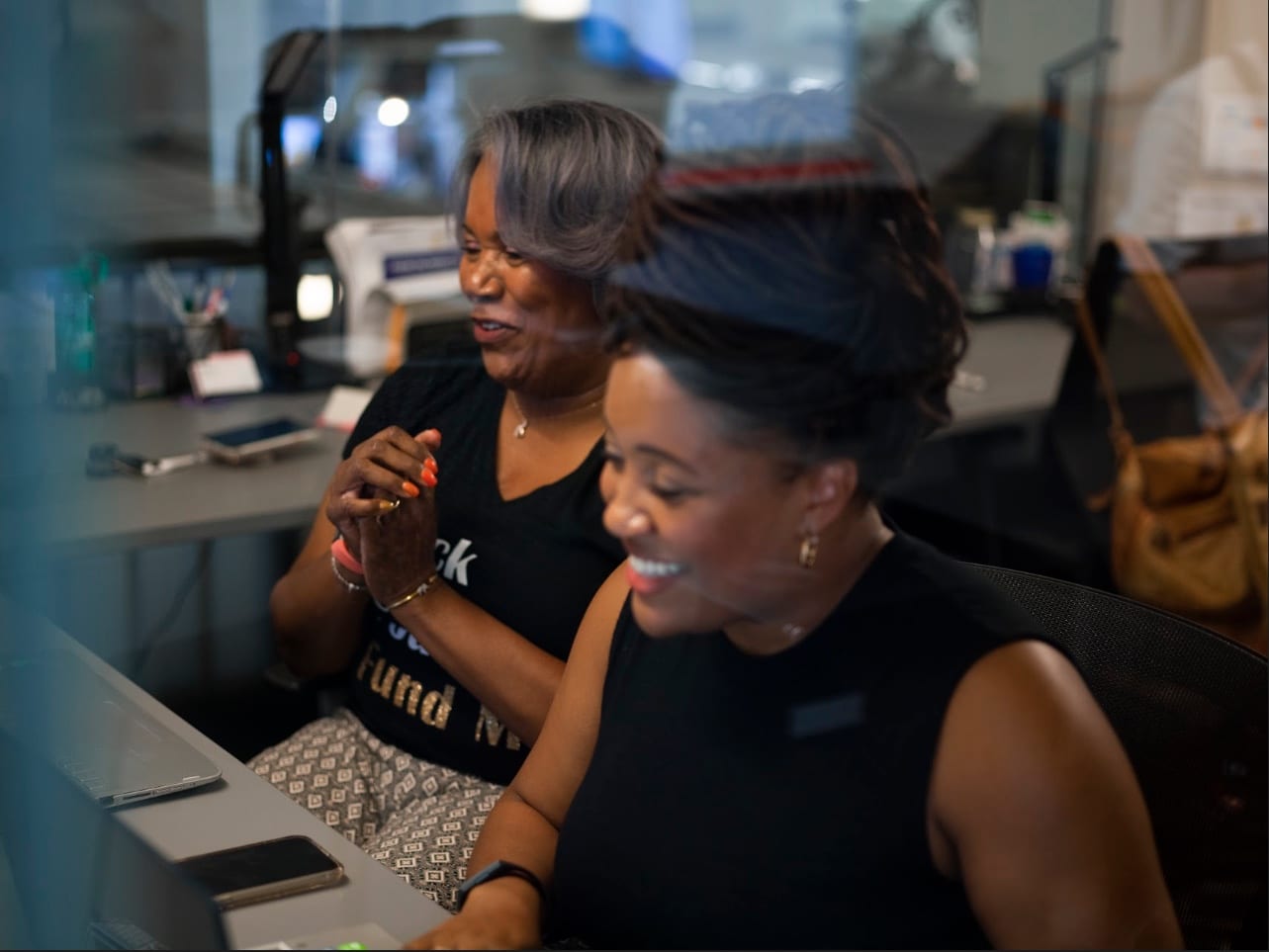 In 2014, Ashlee Ammons was living a comfortable life in New York City, producing celebrity driven events and working in brand marketing. She’s close with her mom, Kerry Shrader, and one day Ashlee called to vent about an awkward experience she’d had at a conference mixer. The two women realized that, despite having strong networks in their respective fields and feeling confident in their social skills, they’d both found it difficult to strike up conversation in a professional setting–especially in the digital age. After four hours on the phone, the duo hatched an idea. They saw themselves as natural connectors, able to bring people together from all walks of life, and wondered, “How do we do this with software?”Â

Their answer? Mixtroz. A mashup of “Mixer” and “intros,” Mixtroz is an app designed to help event attendees connect, breaking the ice and building engagement while collecting real-time data for event organizers. In 2018, Kerry and Ashlee became the 37th and 38th black women to have raised $1 million in funding, and their clients include TEDX, Alabama Power, and universities that use the app to help incoming freshmen meet new people. So how did this mother/daughter team get from a phone conversation to co-founding their own company? Read on.

After they came up with the idea for Mixtroz and decided to forge ahead, Kerry put in long hours in Nashville while Ashlee moonlighted from New York, holding down her full-time job. Ashlee liked predictability and order, and she enjoyed her big-city lifestyle–entrepreneurship was a total departure from who she was at the time. But in October 2015, Kerry was diagnosed with breast cancer. Within a month, she went through surgery and radiation and still never once lost focus on Mixtroz. Kerry’s determination in the face of hardship inspired Ashlee to dive fully into their journey together. Ashlee packed her bags and moved into her family’s home in Nashville, surrendering her professional identity to start from scratch with her mother. It was a humbling refresh when she had already risen to the top of her career. “Entrepreneurship made me do it again,” she says.Â

Take care of yourself

During that first summer in Nashville, Ashlee suffered from FOMO, watching from the sidelines as her friends explored extraordinary things. As a 28-year-old living at home, she saw life passing her by and started experiencing signs of depression. “Entrepreneurship is hard. If people don’t take care of themselves mentally and physically, it’s a recipe for disaster,” she says. Ashlee sought treatment to address her depression, and eventually got back on track. Still, founding Mixtroz–like almost every startup–meant pushing through a slow start accompanied by rejection. “There’s a huge misconception that entrepreneurship is a sprint when it’s actually a marathon,” says Ashlee. Blocking out the noise of naysayers, Ashlee and Kerry persisted: refining and iterating on their product, listening to feedback from early adopters, and continuing to push their product forward.Â

The two founders pursued every opportunity to meet with investors and began entering pitch competitions. “If I hear anybody saying anything contrary to me, my mom, my business, my team, I am ferocious. I don’t have a soft spoken bone in my body,” Ashlee said. This served her well, especially when competition was tight. At the Rise of the Rest competition in May 2018, Ashlee pitched Mixtroz to Steve Case, former CEO of AOL. “We may not have had the best product,” Ashlee recalls, “But I was the most prepared and I came ready to win.” Case commended Ashlee after she finished her pitch, the last slide of which included an African proverb that Case wrote about in his book, “If you want to go fast, go alone. If you want to go far, go together.” In an effort to tailor the presentation to her audience, Ashlee did some homework beforehand that ultimately helped her win the competition. She walked away with $100,000, and she and her mom decided to relocate from Nashville to Birmingham, Alabama, where the competition had taken place.

Ashlee and Kerry had already spent time in Birmingham, where they participated in Innovation Depot’s Velocity Accelerator. When asked what Mixtroz brings to the city today, Ashlee says, “We are literally reshaping what people think of entrepreneurship. We are making it more colorblind, more inclusive, more age agnostic, more gender agnostic–that is a great thing.” Birmingham itself is a city that implements coding programs into core curriculums and provides proper resources so that young adults don’t feel the need to move away from Alabama to pursue their entrepreneurial dreams. The city has redefined entrepreneurship so that it’snot just “a sport for the elite,” as Ashlee says. She adds, “I want their journey to be a bit easier than mine was.”Â

“I am as much of an entrepreneur as a guy who puts a lawnmower in the back of his truck and realizes that he can offer something that the competition can’t,” Ashlee continues. She credits Birmingham’s environment with helping Mixtroz to thrive, even positing that she and Kerry wouldn’t have been able to pursue their business anywhere else. “Birmingham listened and didn’t assume. We’ve had such an ugly history here. It’s not lost on me that my grandma is 90 and she lived in Alabama during [the fight for] civil rights, yet my mom and I raised a million dollars here.”Â

Although Ashlee and Kerry had a limited knowledge of entrepreneurship before embarking on their Mixtroz journey, the thing that mattered most was that they cared about solving the problem they had unearthed: how to connect individuals at networking events and gather data in the digital age. Their early promise and dedication was seen by family and friends, who raised $200,000 to fund Mixtroz at its outset. This was at a time where African American females, on average, were raising $36,000–an upsetting number when compared to white males who, at the same stage, were raising an average total of $1.3 million. From the earliest part of her startup journey, Ashlee learned an indelible takeaway: “Don’t let the fear of not knowing something stop you from starting.”