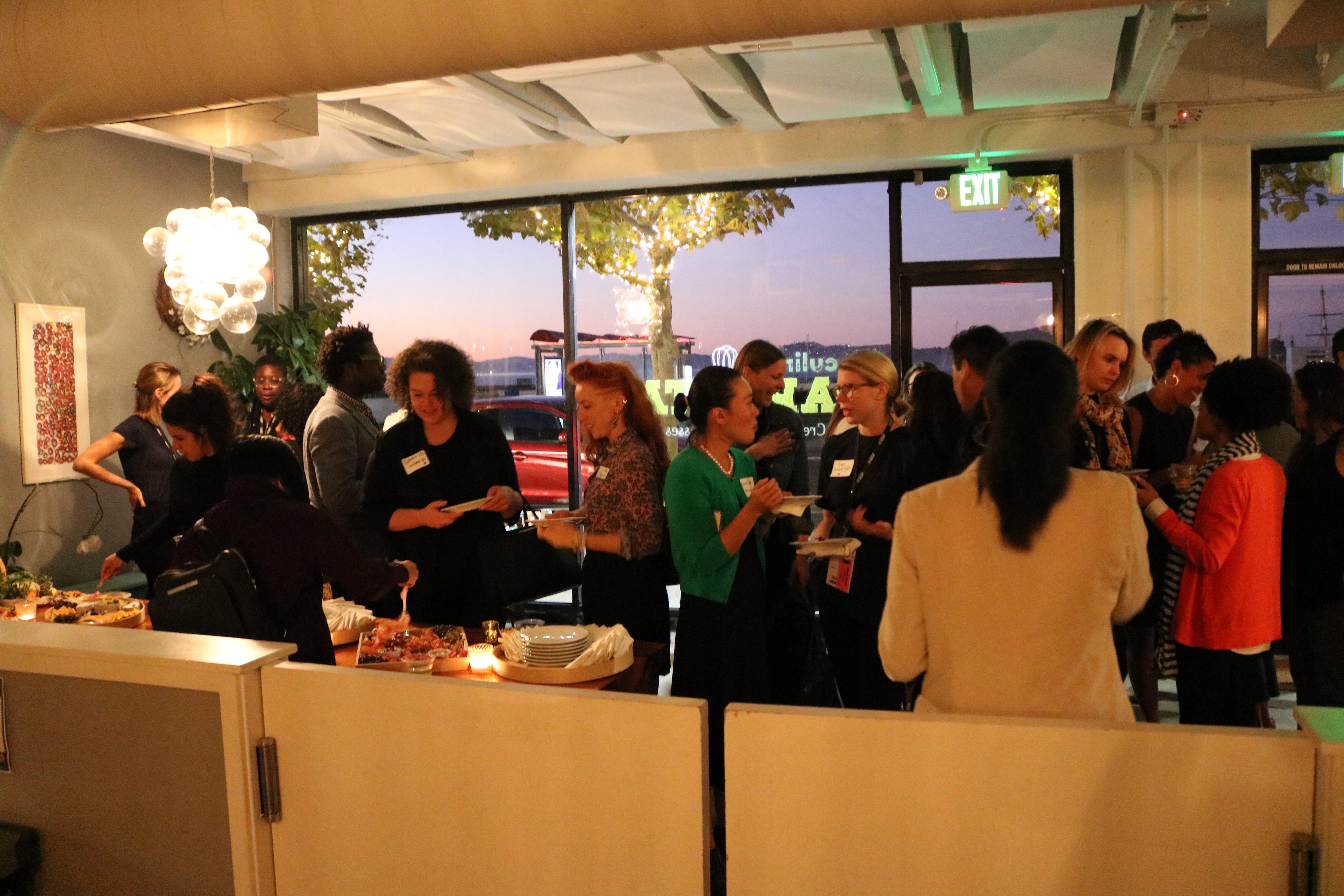 As we enter the winter season approaching the end of the year, we wanted to reflect on one of the highlights of the previous season. In October, we attended SOCAP19 in San Francisco. As every year, this impact investing conference created an amazing space for connecting to other change-makers, sharing information and hearing from industry leaders. The reason this year was particularly special was that Beta Boom co-hosted a happy hour mixer that brought together diverse founders, impact investors, and supporters for an evening of conversation.

Our motivation to host was clear. First, SOCAP is a huge conference that can feel overwhelming. After a day of inspirational addresses, panels, and networking it’s important to decompress and talk with people who share our interests. Second, since starting Beta Boom, we’ve had the great pleasure to connect with national organizations that are promoting inclusive entrepreneurship across the US (such as the Kauffman and Case Foundations), as well as many local groups supporting female entrepreneurs and people of color. Our work also builds ties to individuals seeking to invest in more diverse founders. While all these groups are working toward a common goal, they aren’t often in the same room together.

In short, we hear all the time about the need for greater connection and collaboration between founders, investors, and supporters, so we endeavored to bring them together in a relaxed setting to further build these connections.

Co-host Monique Aiken, VP of Programs at Mission Investors Exchange (MIE) came wearing multiple hats including as a member of the steering committee for the SEO impact investing network and as an alumna of the Tiogo Foundation. In the spirit of collaboration, Monique merged MIE’s 4th annual happy hour event with this gathering, inviting all threads of her connections to attend as “a testament to the spirit of the night.” She encouraged the room to “work in coalition and build community to go further, faster together.”

In a room overlooking the Bay, with food and drinks in hand, conversation flowed and connections were sparked. We wanted to give our guests a window onto the important work founders and supporters do, and highlight how these roles intersect, so we organized two informal Q&As. Our founding partner, Sergio led the first conversation made up of three founders/CEOs:

They started by discussing the most important lessons they’ve learned as founders. Erica confessed she’d been a perfectionist before she became a founder, “and any founders out there know that doesn’t work well. I also had to realize I can’t do everything in one day.” She advised fellow entrepreneurs to take work/life balance seriously, and explained she spends a couple mornings a month volunteering in her son’s classroom. “I don’t bring my phone, I don’t check my email, which is very tough. It’s a very exhilarating experience.”

Meena continued by noting the lessons her users have taught her, explaining that “purely as a result of the ingenuity and resourcefulness of the people [we serve],” Atma has gone from “a way for urban poor people to share water price information,” to a tool for building resilience to future disasters. “I’m just constantly humbled and amazed by that.”

Amanda, who didn’t come from a business background before launching her startup, talked about how she’s learned that “Everyone is making it up as they go.” While finding investors and advisers who can help you get from A to B is key, she’s also learned that there are really no specific markers of success, so founders should “Just keep going.” She also touched on how her platform can address the immediate needs of her users, saying, “We all think that education needs a big overhaul, and that’s true, but the kids right now need it tomorrow. They don’t have time for us to get it together and overhaul it.”

All three women closed by mentioning how partnerships could help take their companies to the next level. Amanda and Fiveable are looking for a way to help students pay for livestreams. Meena explained that entering the disaster space has brought Atma into conversations with insurance companies like SwissRe, (whose tagline is “Making the world more resilient”) and she’s been buoyed by the realization that there are “big institutional sectors that are driven by the same goals that our users have.” Erica and Medhaul have already partnered with Lyft, and she noted, “Solving issues in healthcare is not something that one company can do,” so she’s open to “nontraditional” partnerships with big companies like Google or Walmart.

Sergio concluded by reminding the crowd that one thing Beta Boom really believes in is helping entrepreneurs in ways beyond investing capital. Supporters “can provide connections to customers, to mentorships, to strategic partnerships, and there’s also a huge value in providing visibility into the work that founders are doing. So when you do meet a founder I would really challenge you to ask yourself, ‘What other ways can we help them be successful and better serve their users, their customers?’ ”

Investors and supporters challenged us to check ourselves, think of unintended consequences and to perhaps not run fast and break things

This conversation zoomed out a bit to address the differences these panelists see between predominant models of investing and thinking about tech and the ways they and their respective organizations see and do things.

Eliza set the tone in her intro about why she’s currently focused on poverty and inequality in the US, saying, “we’re at a critical juncture… and there’s massive urgency around how we think about and start to shift systems here.” She continued by explaining her approach to investment, adding, “I’m somewhat contrarian in the venture investing world in that I don’t want my entrepreneurs to run fast and break things. I want them to be thoughtful and deliberate and energized.”

After explaining that her org “believes that dignified job creation is the best way to tackle poverty in emerging-market countries,” Nathalie stressed the importance of “hacking” in a very particular sense: “Working with people who have done [similar work] and are willing to share their results.” This approach is currently playing out in an initiative she’s working on that will integrate gender-equity metrics into the enterprises where NESsT invests.

As one of two developers of the first CRM system and co-founder of the People-Centered Internet, Mei Lin took a moment to emphasize that investing and innovating “isn’t just about getting money and doing things” – it’s also paramount to consider the unforeseen consequences of the technology we are working to create.

Building on the notion of thinking beyond the current moment, Dustin stated that the most important thing he’s learned in the impact investing space is the need to “Check yourself. Always. It is my absolute privilege to be able to work with entrepreneurs that are changing the world, and I come to things from my very own perspective, [which] is white, male, and privileged. I’ve had to learn to actually engage with people and understand what their struggles are and, honestly, to always try to provide value to the other person in conversation.”